Violet Blue December 24, 2010 2 pieces of BRILLIANCE put forth by a DARING and DELIGHTFUL reader 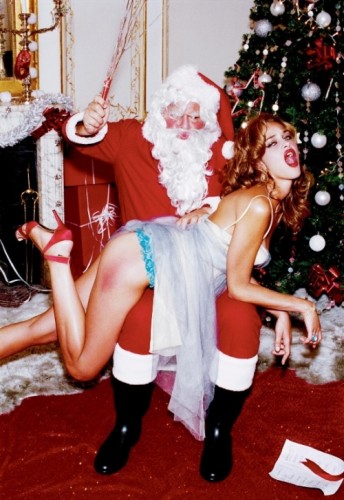 On Thanksgiving, one of the world’s top erotica writers and editors, literary siren Alison Tyler gave us a very special (and explicit) serving of erotica just for TinyNibbles readers. We made a deal, and she wrote two more stories for Christmas and New Year’s – these are only and exclusively for us – to be published here for the first time. Thank you, Alison! If you like this, be sure to give her a shout on Twitter.

I’m proud, honored, and totally titillated to share with you “It’s a Secret, Santa” by Alison Tyler. Image by Ellen von Unwerth.

Anyone who knows me—I mean, really knows me—understands what I want for Christmas.

But nobody really knows me.

See, there’s a difference between joking with your co-workers over a Friday evening margarita, and confessing to the hunk in the neighboring office that what you really want, what you really need, is for him to bend you over his desk and spank your bare bottom with a ruler.

If only people still used rulers.

Why did I want Derek to spank me? Why do people want anything? One of my girlfriends—the one whose bachelorette party I’d most recently hosted—shared once that she liked to touch herself while her fiancé watched. My college roommate had told me in a moment of drunken honesty that she needed to be tied down in order to get off. People have yearnings. They have desires. They have bosses who say things like…

“Yes, Sir,” I told him with a nod. Right then, I decided I would do more than plan the heck out of that party. I’d get what I wanted for Christmas.
I started by sidling into Derek’s office at the end of the day. We were the only two employees left at work. That way, if he said no, I wouldn’t have to walk past any of my co-workers with my cheeks all red from embarrassment. And if he said yes, well, my cheeks might be red for a different reason entirely.

“How would you like to do me a huge favor?” I asked from the doorway.

That’s exactly what I wanted to do. I wanted to try him, to test him, to climb up on his desk and tell him exactly how naughty I’d been all year long. Nobody had seen me being naughty, of course. The naughty stuff had occurred in my head only, but that didn’t make the deeds feel less real.

“Wanna be my Santa?” He looked at me, blue eyes curious, mouth set. I couldn’t tell if he liked the idea or not. So I continued. “Not for me. Not specifically.” God, Julianne. Take your high-heel out of your mouth and speak for Christ’s sake. “For the party.”

“Would I have to wear a costume?”

“Of course.” The fantasy didn’t work with him in his charcoal suit.

“With a padded belly?”

I considered the question. In my daydreams, he didn’t have a padded belly. Hmm. Maybe I could cast him as Santa in his younger days. That sounded good to me. “No belly, just the suit and the white beard…”

“You know the drill. While everyone else gets inebriated on vodka-spiked punch, you pass out the holiday swag before they pass out on the floor.”

He stood and came towards me. To my surprise, he shut his office door and flipped the lock. We were standing so close together, closer than we ever had been before. I noticed that his eyes were not truly blue, but a blue gray, almost steel.

“What’s on your list this year?” he asked, taking me by surprise.

“It’s a…” I started again, uselessly.

Had he just said deserve? And confess? And desires? My knees felt weak. Derek seemed to sense my discomfort. He led me to his sofa and sat me on the edge. I blinked rapidly, wondering whether this was for real, or simply one more of the many fantasies I’d engaged in without his consent during the year.

Derek sat at my side. He put a hand on my knee. I started to shake.

“You know, Santa keeps a pretty strict list,” he told me.

“You bet.” He was reaching for me, pulling me over his lap, sliding up my no-nonsense navy-blue skirt. I shut my eyes. This couldn’t be happening, but in case it was, I decided to enjoy every second. He settled his hand on my panty-clad ass and I moaned. “So I expect you to tell me what you want for Christmas before you end up on my naughty list.”

“Because all I want for Christmas is a spanking.” 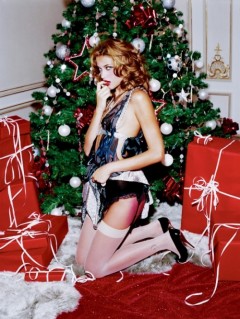 Oh, god, I’d said the words. Said them aloud. But he couldn’t have been surprised. I was laying across his lap after all, my face pressed into the cool maroon leather of his office sofa, my body stretched and waiting. He cupped the cheeks of my ass through my panties and then said, “I’m going to take these down. Proper spankings always occur on the bare.”

Had he read my mind? My thoughts? My fantasies?

Oh, holy fuck. Derek was the IT man at our office. He’d checked on my computer countless times. And I was the nitwit who kept personal files close at hand.

“…gave me a very clear idea of what you need. But I could have spelled it out for you just by watching the way you sashay around the office.”

Sashay? Me? In my skirt suits and sensible shoes?

“The way you walk screams SPANK ME with every step.”

I couldn’t believe what he was saying, but I couldn’t argue either. Not in such a vulnerable position.

I nodded, but somewhere deep inside me took the time to love how he said my name.

“And I want you to count each blow.”

Carefully, he slid my knickers down to my knees. Then he started to laugh. Was he really looking at my ass and laughing? What was there to laugh about? I started to push up, but he pushed me right back down.

“I never pegged you for the sort of girl to get a tattoo on her ass.”

My cherries! I’d forgotten all about them. I started to explain. “I was 18, with some girls from my dorm…”

“I don’t care why you have them. I’m just going to enjoy making them redder.”

He was saying all the right things. At least, he was until he stopped talking. The first blow took me by surprise. I’d never been spanked before—not outside of my X-rated fantasies. But I’d received enough imaginary spankings to believe I knew what to expect. This was different. This was real. This was, “One,” he prompted me, and I echoed him, softer, “One.”

He struck me again, on the other cheek, and I felt myself growing wetter. “Two,” I managed to squeak out. Who knew counting could be so difficult?

He spanked me faster then, hitting three, four, and five in rapid succession. I decided I’d lied to him. All I wanted for Christmas wasn’t only a spanking. I wanted a spanking, yes, but being spanked made me want something more. Luckily, I could feel from my position that Derek might want something more, too.

He started spanking me harder. I could imagine the handprints he left on my ass with six and seven. I was in tears at eight, breathless at nine. He hesitated before landing the hardest blow of all. “Ten,” I sobbed.

“I’ve been waiting to get you like this for months,” Derek murmured as he pushed me off his lap.

“Why didn’t you say anything?”

“I wanted a green light from you.”

“I—“ I stammered. I thought I’d said things, thought I’d been flirtatious. Now, I made sure he understood what I wanted. I shimmied out of my skirt and bent over the edge of the sofa. Derek took up his proper position behind me and slid his cock between my thighs. I groaned. The sensation of being fucked after being spanked was better than I’d ever imagined. He filled me up, and then pulled back, thrust forward, and stayed sealed to me.

“Will you still be the Santa?” I asked as I teetered on the brink.

All I’d wanted for Christmas was a spanking.

Well, that and a fucking.

Oh, yes, and a man who could do both exquisitely. But maybe my fantasies weren’t limited to the holiday season.

Luckily, Derek has plans to slide down my chimney all year long. 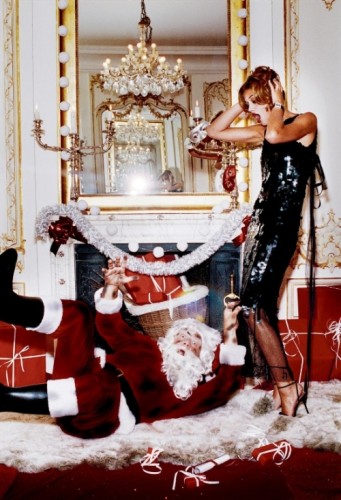