You Are Here: Home → 2010 → November → Hot Thanksgiving Erotica by Alison Tyler: “Giving Thanks”

Violet Blue November 25, 2010 5 pieces of BRILLIANCE put forth by a DARING and DELIGHTFUL reader 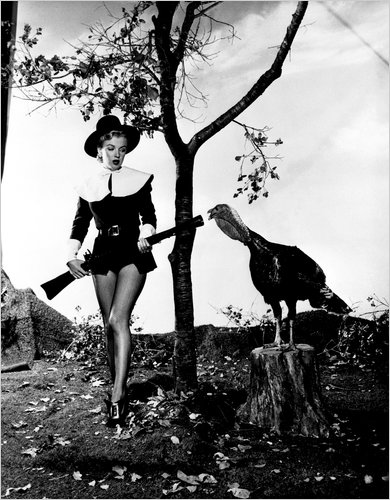 Today is Thanksgiving in the US. You know, the day before the shopping blitz. It’s actually supposed to the holiday for giving thanks; that’s what it means to most of us nowadays, anyway. It’s the day of great food (hopefully!) and taking a minute to think of the things you’re glad, or lucky, to have. Here’s a tip: if you have a lover, find one secret second where you can whisper in their ear (or whisper-message) something sexy you that you are oh-so-grateful for. Such as, “It’s Thanksgiving and I was thinking how thankful I am that you’re such a great kisser,” “Hey Thanksgiving hottie, I’m thankful to have such a hot playmate,” or “Gorgeous, you have no idea how thankful I am you came with a toy collection.”

I have so much to be thankful for, and that includes you. To that end, I’m also thankful I get to work with some of the most talented authors around, and the very best erotica writers in the world. This most especially means Alison Tyler, a stunningly talented and extremely accomplished award-winning author. She wrote a very sexy, explicit and playful story that fits today’s holiday, and it’s in this post.

We’ll be bringing you erotica, here, for free, for the holidays this year! Please enjoy:

“Giving Thanks” by Alison Tyler

Our apartment is set up with a huge bedroom, a generous kitchen and no dining room to speak of. So it isn’t too often that we throw dinner parties. In fact, we’ve never had guests over to eat. To drink, yes. To play, of course. Just not to dine. But when my 25th birthday happened to fall on Thanksgiving, my girlfriend Naomi decided that she wanted to do something extra special.

“I’ll cook,” she announced grandly. We can invite Joshua and Diva and have a picnic on the kitchen floor. Maybe the Pilgrims wouldn’t have approved, but I know that our friends won’t mind.”

“Do you know how to cook?” I asked, incredulously. In all of our time together, the most I’d seen Naomi cook was toast, and she usually burns it to a point that even she won’t eat it. We’re big on ordering in or going out.

“Of course, I can cook.” She glared at me. “You handle the invitations. I’ll do the rest.”

I shrugged and picked up the phone. Joshua responded as I had, “What do you mean ‘Naomi’s cooking’? She can’t cook!” But I hushed him and told him to have a little faith. Maybe the meal wouldn’t consist of the stuffing and glazed bird we all remembered from old-fashioned dinners at home, but I knew that Naomi would surprise us all.

On Thanksgiving, Naomi brought a present into the bedroom. “I want you to wear this tonight,” she said. I unwrapped the gift quickly, then pulled out a shiny black, vinyl apron.

“Over my dress?” I asked naively.

“That is your dress.”

I stared at her for a moment, to see if she was kidding. She wasn’t. Humbly, I put it on. When Joshua and Diva arrived, they couldn’t take their eyes off me. We sat on the kitchen floor, on a red-and-white checked picnic blanket, and drank the champagne Naomi opened. Then we waited — or I waited — expectantly, for the first course.

While I was lying there, helpless, Naomi began wrapping me with plastic wrap. I could tell it was her, because I know the feel of her hands. I let Naomi go to work — what else could I do? — and within moments I was wrapped from under my arms on down, mummy-style.

“This is like some sort of perverted cooking show,” Joshua said, stepping back on the wood floor. “She’s divine.”

“Gorgeous,” Diva agreed. “Now what do we do with her?”

I would have said that it was my party, but Naomi quickly gagged me with a bit of cheesecloth. She seemed to know what I was thinking, though. Naomi knows me extremely well.

“Start with her birthday spanking,” Naomi said. “Joshua, why don’t you give her the first 10.”

Joshua bent at my side and rolled me over onto my stomach. Diva cradled my head and stroked my hair while Joshua went to work on me with his bare hand. It smacked against the plastic wrap and made me instantly wet.

“My turn,” Diva said next, sounding excited. “What should I use, Naomi?”

Diva did as Naomi advised, and soon the sound of towel stinging ass echoed through our kitchen.

Naomi administered the last strokes herself, using our wooden pizza board (the utensil you use to lift a pizza off the stone). Naomi got into the spanking so much that she forgot I was only due five more blows and she gave me an additional 20. I was well-warmed by the time she’d finished.

“Thank you, Mistress,” I murmured through the gag, thinking that Joshua was wrong. This wasn’t a kinky cooking show, it was an X-rated thanksgiving meal. But I, for one, was giving plenty of thanks that I was a part of it — or, really, the main course.

“Now what?” Joshua wanted to know when Naomi had completed my birthday spanking.

“We’re going to play a guessing game,” Naomi said. We’ll rub items on her skin until she guesses what they are.” She took the gag out of my mouth, as she spoke, and rolled me onto my back again. “You like games, don’t you, cutie?” she asked, teasing.

I shrugged. It sounded easy enough. Innocent enough. The first utensil was rough and Diva dragged it along my inner thighs, catching it against the plastic wrap and pulling. I knew exactly what it was in a few strokes, and though it felt deliciously dangerous, I guessed “meat tenderizer,” and she stopped.

The second item one was cold and it moved in an odd, crunchy way. Naomi placed the mystery item over my breasts. My nipples, already hard, became instantly pinpoint erect.

“What do you think?” Joshua asked softly.

They laughed and one of the partiers moved the object onto my stomach, making me tremble violently. “Not ice…. give me a clue.”

“If she can’t get an item, game’s over and we’ll wrap up Joshua,” Naomi said. I couldn’t guess, so Diva cut me out of the plastic wrap and I slid into my apron. I looked onto the counter and saw the bag of frozen cranberries — something I never would have thought of. So Naomi really had bought something Thanksgiving-related for the dinner. She just hadn’t cooked it.

“Should we wrap him up now?” Diva asked. It sounded as if she were looking forward to taking out some aggressions on Josh.

“Strip him and tie his hands, first,” Naomi suggested, coming toward us with a ball of kitchen twine and a new blindfold. Joshua was situated in the center of the blanket and then willingly bound.

It turned out that he was good at the game. I ran a baby’s teething ring, also frozen, along his inner thighs. He let me proceed for a few moments before guessing, but I think he just liked the way it felt. Diva took her turn with a ravioli rolling pin. Joshua instantly knew it was a roller, but couldn’t immediately figure out what the cut-away shapes were for. Next Naomi, knowing he’d guess but having fun anyway, pinched his nipples with metal tongs. When he didn’t cry out the answer, she gently gave his balls the same treatment. Joshua’s always in the mood for a bit of cock-and-ball torture.

While Diva pressed into his skin with cookie cutters, Naomi took me by the hand and led me to the refrigerator. I know that the sound of the door opening and closing must have given Joshua a clue — but the wrong one. Naomi had deep-chilled some chocolate syrup and she handed the can to me. Suddenly, I decided the evening was going to be incredibly fun.

I stood over Joshua and asked, “Are you ready?”

I let him smell the can. It can be so confusing to have one of your senses removed. Joshua didn’t know what I was going to do to him and his body tensed. His lips pulled back from his mouth and he inhaled deeply.

“What?” he started, but I didn’t let him continue. I tilted the can and began to drip the cool syrup along his body, drizzling the pure chocolate over his skin. He shuddered, but I could tell he was into the feeling. And from that familiar smell, he must have known exactly what I was snaking along his thighs, reaching closer to the mammoth proportions his cock had grown to.

“I–” he said next, stuttering, arching his back and tensing his thighs. I was making a huge mess, and Diva couldn’t wait any longer to clean him up. As Joshua said, “Syrup… chocolate syrup,” Diva brought her warm mouth to his body and began to lap like a hungry kitten, cleaning his cock completely before she rolled on a condom, hiked up her skirt and climbed on top of him, rewarding him for being such a good boy. Joshua didn’t have to guess what was enveloping him now. He knew the warm, wet sweetness of his lover’s pussy, but when she pulled off and motioned for me, things got even more interesting.

Now, the game was “Fuck Joshua until he guesses your name.” He had a choice between me and Naomi and he knew, somehow, that it was me. We mixed it up for him, letting Diva back on briefly before Naomi took a ride, going through condoms like a box of dessert chocolates. Then we confused him further by placing one cunt over his mouth and another on his cock. He had to lick, fuck and think at the same time, and soon he couldn’t help but stop guessing and start coming.

It was Diva’s turn to be tied up next, but we didn’t bother. We were far too busy celebrating in ways our forefathers could never possibly have imagined. But that didn’t mean we had any less reasons for giving thanks.