Violet Blue November 29, 2010 6 pieces of BRILLIANCE put forth by a DARING and DELIGHTFUL reader 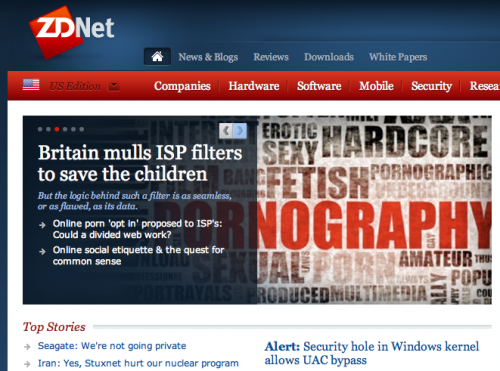 Update: Hey, my article made it to the ZDNet/CBSi front door! Yay!

It would be like when Google rolled out Instant and didn’t tell anyone it was filtered (check this out). Or like how no one knows Flickr is extremely filtered by default because they don’t even hint that you can take Safe filtering off, or tell you how to do it.

After writing the article, I am mostly like, WTF England. You’re already looking like the Twit Olympics with Ed Vaizey and “we don’t need no net neutrality.”

I’m mostly irritated at the BBC for citing the lazy, unsubstantiated numbers that Psychologies Magazine pulled out of their ass — as if they were actual study data, and giving other media and news outlets the platform to write “according to the BBC.” Because now they will.