Violet Blue October 26, 2010 0 pieces of BRILLIANCE put forth by a DARING and DELIGHTFUL reader 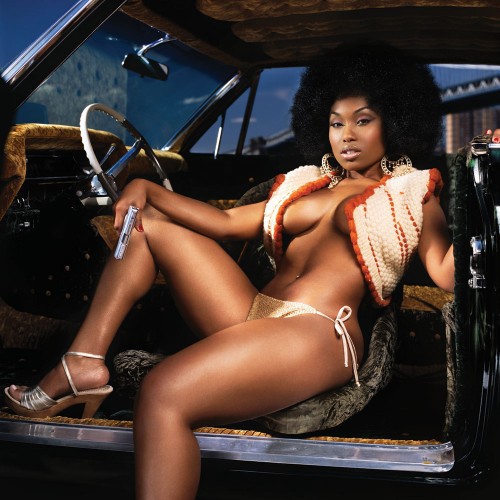 The first time I laid eyes on Howard Huang’s new book Urban Girls was almost two weeks ago. I was at a booksellers’ convention signing copies of my just-released collection Just Watch Me: Erotica for Women, and across the crowded room my eyes locked on the Urban Girls cover like a homing missile. Have you ever had that sensation with a book? Where you feel like your eyes met and it’s lust at first sight? It gets you right in the gut, and lower. The minute I was done defacing readers’ books, I made a beeline to the lineup of glorious buns that had been staring back at me for over half an hour. I picked up the mighty tome and the whole place faded away.

I felt like I’d found a book I’d been looking for over a period of… forever. I peeled open the pages with reverence, soaking up images of sexy women I’d been longing for but had only caught glimpses of in places like Black Men Magazine’s Girls Gallery and Urban Ink’s Pinups Archive (magazines I love). Glossy color pages let me take my time lingering on oversize images of beautiful, powerful, mighty babes in city settings, with weapons, with sexiness that Playboy can’t even get near, with a fierceness that we seem to be desperate to see in our contemporary goddesses of pixels and ink. 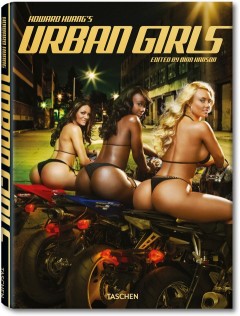 I loved Urban Girls that much. As I paged through it, I was interrupted by the Taschen rep. He told me how proud they are of the book, that it’s a really important marker for them. I explained to him that this was something people really wanted: the hot, voluptuous, superheroine urban babe in all her glory. I ogled through the book, still turning pages and unable to look away while he continued, telling me the story of the book. How Huang went to art school in SF, moved to NYC and made a name with his magazine work (in the magazines I referenced above). I listened and sunk into the photos of girl on bikes, girls with guns, fold-out multi-page spreads — none explicit, but all undeniably too sexy and just too much woman for anything I’d ever seen. It made sense when I read this about Howard Huang on the Taschen page for Urban Girls:

His composite photos feature exotic locales, lush interiors, or the neon-washed nighttime streets of Manhattan. His shapely heroines, including singer Jacki-O, actress Vida Guerra, and reality TV stars Hoopz, Deelishis, and Risky Jones, escape on sleek motorcycles; rob banks with guns drawn and Halliburton cases spilling money; brandish swords like Japanese assassins; conjure fire; hunt big game, and generally kick ass while displaying their own generous posteriors in photos reminiscent of video games. “The trick is to rework an image to enhance my vision, without drawing attention to cheesy Photoshop special effects,” says Huang, who studied under advertising photography master Michel Tcherevkoff. The result is a unique marriage of the new pictorialism with classic glamour photography, and a look at the little known niche market of African-American and Latina bikini models, collectively known as “urban girls.”

I need Urban Girls. You can get it on Amazon, from Taschen, and I have it on my wishlist for safekeeping in line for my next book-purchase writing windfall. I suggest you do the same :)