Open Question: What Does “Sex Positive” Mean to You?

Violet Blue October 9, 2010 35 pieces of BRILLIANCE put forth by a DARING and DELIGHTFUL reader 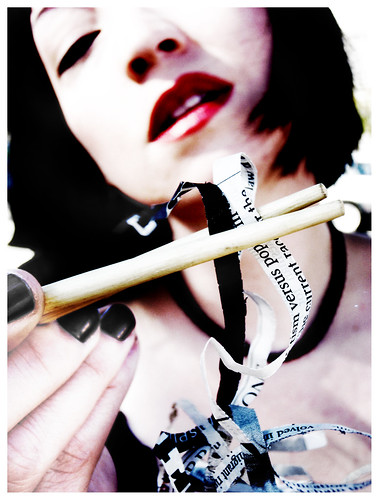 I want to know: What does “sex positive” mean to you?

I’m asking this question on Twitter and Facebook, but I am going to compile the answers here.

If you don’t want to comment here or Tweet @violetblue and want to remain anonymous, free to tell me your definition of “sex positive” in the comments, or email me – violet [at] tinynibbles [dot] com

Thank you — I think we all need to have a voice in this. Tell them what it means. Tell me. That was (part of) the point of vb.ly. We had a sex-positive URL shortener: that meant that while it was a general-purpose link reducer, we would not censor or remove your link transference because it was sexual in nature (from breast exam info to sex toys to titillation), nor would we make spurious editorial decisions about sexual content. We were not pretending that links to sexual content were not being made, but instead made a transparent policy around this inevitable fact. And that linking to sexual content is not a bad thing. It is, in fact, a positive expression such that a safe space needs to be made to protect it. The (open) Internet is where this can happen.

Especially now that this issue is hitting conservative press, I want our communities to show that “sex positivity” does not equal pornography.

Luscious_Lily Lily Elle Sex positive is not shaming someone into complying with your idea of what sex should be.

JPBarlow It means material the URL of which should not be shortened with bit.ly. Nice to see you’re now from Greenland.

Noadi It means that consensual sexual activity is a positive, healthy part of being human that I refuse to be ashamed of

AlistairKookie Being Sex Positive means the promotion of No Shame in Sex. Sex Is Positive.

sanguinevamp What “sex positive” means to me… “Consensual adult sexuality and gender performance is a natural and normal human experience … …that is a valid and non-shameful topic of discussion, study, education, and …. personal ethical and physical exploration and decision.”

DrAceTheGreat Sex Positive: Realizing that sexual encounters between consenting adults is not something to be ashamed of.

frhunting It must mean that it’s good or even great.

_itsamanda_ to me, sex positive is creating an environment where no one feels shamed for their (consensual) sexual activities/conversations

danielle_heller sex positive is understanding that sex and desire are natural and not to be shamed, regardless of gender.

addictedimage the ability to greet any form of SSC sexual act with tolerance and respect for the simple fact that it brings another happiness. (personally I think instead of just tolerate we should actively support people in their pursuit of personal happiness.)

RedRegion To be and let be other people and promote open sexuality and lifestyles as long as it does not infringe on others.

SynthiaGynoid Sex+ is embracing joy, lust, pleasure and adult, consensual pursuits of happiness for their own sake. Death to shame.

xquitz being sex positive means to be yourself without shame or fear and to be free of hypocracy.

sexpert317 Sex positive means to be able to discuss sex openly and to see sex as a natural part of life.

RoccoErnest sex positive: any consensual sexual act between adults results in a net positive gain of goodness for mankind, a’course.