Violet Blue July 27, 2010 18 pieces of BRILLIANCE put forth by a DARING and DELIGHTFUL reader 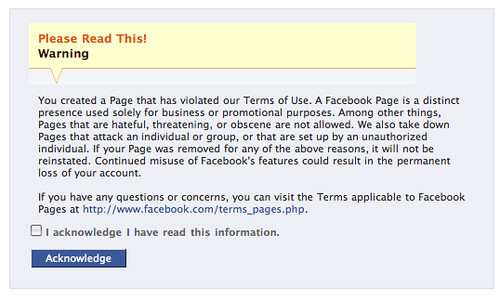 I had built an intelligent community of over 3,000 members, mostly women. They have deleted a giant community. All talking about what it means for women to “take back the right to look” at explicit imagery.

Facebook has given me no options for recourse: no evidence, no trial, just judgment and sentence. Like when they ‘accidentally’ removed the Ban BP Oil page (800,000 members) and then restored it, removed the gay author page for ‘Band Fags’ which had been up for two years, or when they removed Robert Scoble completely.

As I wait for Facebook’s response, here is the letter I just sent them:

I’m Violet Blue: bestselling and award-winning author, and educator who speaks from UCSF and UC Berkley (Boalt) to Google Inc. Tech Talks on my field of expertise — exactly what this Facebook group page was about.

My page did not violate any of the reasons stated for deletion. It was under constant attack by people who disagreed with our point of view, and constantly reported our posts and images, even though we were very careful not to violate your Terms. May I find out why the page was removed? It is my utmost priority to follow and uphold Facebook community rules and standards. With national media attention to the page, questions will be raised and I hope to be able to furnish answers. Especially with a higher minded page of over 3000 members seeking community and discussion around a topic that did not target any group, threaten anyone, or link/depict/suggest inappropriate content. In fact, I policed the posts hourly for spam and attacks on our members, of which there were many. We never posted obscenity in links or images, though innocent user photos seemed to be increasingly mysteriously removed.

I feel that our page was targeted, and that we did nothing to violate the community standards of Facebook, which we sought to uphold. Any help to find out why this has happened would be deeply appreciated. I do not want to be talking to press about this in the next few days and be left guessing. We sought a safe place to discuss sex culture in media, and that is all.

I sincerely hope we can resolve this. Salon and Examiner wrote about our page as a signifier of community organization around women’s empowerment, calling it a new movement for women’s rights. I could tell we were under attack by those who violently opposed our discussions and representation as a community intersection for enriched discussions about important women’s rights issues. This development is confusing and saddening.

Please help me understand what I can tell media outlets asking about this, and the over 3K member we had in the page group.