Sex toys that will change your life

Violet Blue December 17, 2009 3 pieces of BRILLIANCE put forth by a DARING and DELIGHTFUL reader 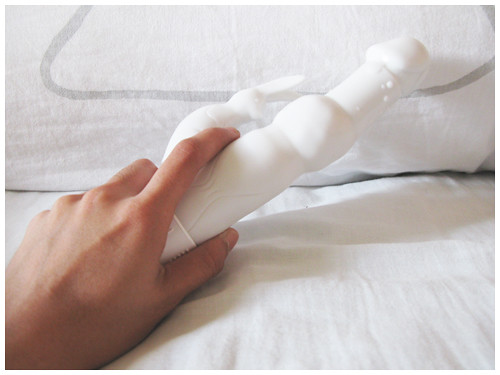 Image of the life-changing Iconic Rabbit (which I want!) by Pat Law.

This week’s San Francisco Chronicle column is one of my favorites of the year; it’s called Sex Toys That Will Change Your Life Violet Blue: Can a sex toy change your life? For many, the answer is yes. A short while back I idly asked people who follow me on Twitter what sex toy changed their lives. The question duplicated on my Facebook page and the responses were overwhelming. So many people answered me that I couldn’t take it all in right away; I had to go back and page through the replies — from which emerged some very definite items that had created pivotal experiences for people. The thing is, orgasm is a bodily function, right? Like breathing, eating, etc. But once you have an experience with that function that is about pleasure, it’s like going from navigating a dark room with a flashlight to having the lights turned on. And suddenly, you can see so much more. Being is the room is a fuller experience, and so much more worth it.

In the article I tell you what sex toys have changed peoples’ lives the most. Here’s the intro:

Having an orgasm used to be so arduous and difficult, it’s no wonder many old people have never had one, or if they have, they seldom talk about it or tell their spawn about having one. In times of yore, before YouTube videos and electricity, rubbing one out was akin to deciding to make a trip from New York to San Francisco in a covered wagon. You could get halfway there, but if something broke down and it was winter, you might have to eat something horrifying to make it out alive. With your pants down, bandits could attack you at any moment. There were vibrators, but they were made of wood and powered by pedaling, or frightened rodents running in little exercise wheels. Everything had to be done by hand. There was no lube until 1910, so if the friction didn’t kill you, fire was always a concern. You had to use corncobs as freshwipes. People had to make their own amateur porn.