This week’s Chron column: Sex and Zen with Brad Warner

Violet Blue March 26, 2009 1 piece of BRILLIANCE put forth by a DARING and DELIGHTFUL reader 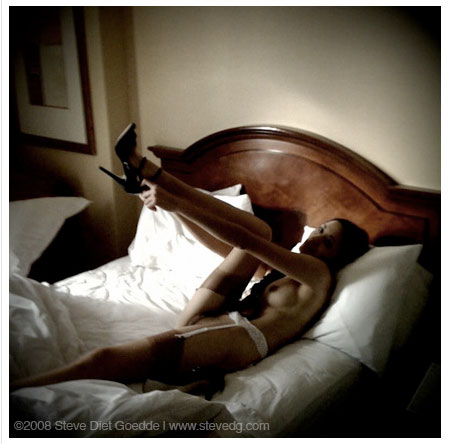 Image by my friend Steve Diet Goedde, taken with his iPhone and processed with CameraBag.

This week, I got to meet and interview Brad Warner (thanks, Eddie!) Warner’s an ex punk turned Zen master, and had quite a bit to say about Buddhism and sexuality, such as how it relates to sex work and survivors of sexual trauma. I think you’ll like the piece a lot. Snip:

It was the “sex” part that made me do a double take; and that Warner writes a column for soft-core pinup Suicide Girls opened up a world of wonder; how, exactly, do sex and Zen go together? Sure, I’ve heard plenty of puerile pontification from Yoga nerds about “achieving Nirvana, baby” while they show you their downward dog, and this town already has a New Age-y sex cult or two where it’s always “ladies’ night.” But Warner is on the level; “Zen Wrapped In Karma” is a no-bullshit first-person account of the year Warner’s life completely fell devastatingly apart as he navigated heartbreak and loss, becoming a self-described “porno Buddhist” as his day job, all while he counseled Zen practitioners through their own crises.

Then he told me his next book was going to be about sex. All about sex. And here I thought Zen Masters were celibate. Turns out, I was only half right. Further investigation was required. Sharing a huge plate of vegetarian Ethiopian food at the Axum Cafe in the Lower Haight later, Warner probably channeled the patience of Buddha as I excitedly grilled him with questions about sex and Zen.